Home Subscribe
Is the PHR/SPHR Certfication Worth the Paper It's Printed On?
Why "Cash Money" Won't Save Your Best Talent..

Today, we offer a modified version of "Fire, Suspend or Wait and See?, aptly named "Fire, Suspend or Play On?".  The goal?  To make the right call with an employee facing legal issues, maximizing the company's interest while being an advocate (to the extent you can) for the employee.

Former NBA All-Star and current New York Knicks executive, Isiah Thomas, was on the ropes in a widely publicized harassment trial, brought against him and the Knicks by a former female exec who alleges Thomas used the "B" and the "H" word towards her, and then said he loved her.  Check out some of the details here.

Thomas was on the ropes, but now there's a verdict.  A federal jury in Manhattan found yesterday that 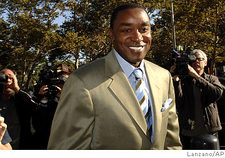 Madison Square Garden and Thomas sexually discriminated against the executive and ordered that the company and its chairman — but not the team’s coach — pay her $11.6 million in punitive damages.

So, Thomas has been found guilty in a JURY trial.  I use caps because you don't see many of these things getting that far.  So with the guilty verdict, what's your call on Thomas?

Before you vote, the handling of the investigation by Madison Square Garden (MSG -the company that owns the Knicks) deserves special attention. The Garden was ordered to pay $6 million for subjecting Ms. Browne Sanders to a hostile work environment and another $2.6 million for firing her in retaliation. The jury ordered that the owner of MSG, James Dolan, pay $3 million for the retaliation. In his testimony, Mr. Dolan said that he alone made the decision to fire her.  Mr. Dolan had no comment on the verdict or the award.

In a post riffing on an earlier installment of Fire, Suspend or Wait and See, Michael Moore examined the unique situation that arises when a star CEO or executive is the target of a harassment complaint.  He advocates independent Boards bring in outside counsel to investigate such high profile claims, so in-house HR people don't worry about the threat to their career as they investigate.

Go to this link, scroll down to the video and watch the first four minutes of the Dolan depositions and you'll understand why he makes that recommendation.  All I can say is WOW....

Although I wouldn't fire him in the middle of a trial, I think Mr. Thomas will be in the unemployment line at the end of the proceedings. His credibility is gone as demonstrated in his media interviews and video deposition.

He fell into the all to familiar "I never trap". If you become a critical witness in a trial and you are asked whether you ever used a particular phrase or word, my advise is never say "never". The opposition will find someone who heard you say it or saw you do it and there goes your credibility.

The legal landscape is littered with witnesses who didn't get this point in there deposition or trial preparation. These are unfortunate comparisions, but Mark Furman never used a racial slur; Bill Clinton never had sexual relations with that women; and Pete Rose never bet on baseball.

Thanks for the notes on what you saw in the deposition - like your take on the "never" trap. So true....

I would have suspended a long time ago pending the outcome of the investigation. The problem, as you noted in the earlier post, is that since Thomas is an executive, no real investigation was ever completed internally. So here we are...

Although you and I would both make the move, the wild card for Thomas in real life is the owner, Dolan. He's said he made the decision to fire the woman alone. Pride will likely keep Thomas employed this year as Dolan shows the world he can do what he wants...