Why Your Employees Don't Care About Company Results...

Of course, they should...

But do they?  If they don't think it impacts them?

As often is the case, sports provides a rare, unfiltered "window to the soul" when it comes to what is going through the minds of employees.  This week, Manny Ramirez, star outfielder for the Boston Red Sox, held court with the press and offered up the following calming words related to the "Sox" being on the verge of elimination, down 3-1 in the American League Championship Series (ALCS):

Nice... You can almost hear the Red Sox fan who drives a tow truck for 30K a year imploding...  First, the obvious observation - it's one thing to think it, another thing to say it.  But... a closer peek at Manny's situation indicates that apart from being covered 24/7 by the national media, he's similar in many ways to the ordinary employee:

1.  If the employee is getting paid and paid well, all must be OK in the world, right? - 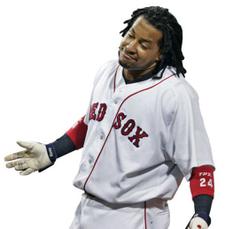 Manny brings home about $20M a year, a reflection of his market value, and a solid indication when he goes to sleep at night that he can find employment elsewhere if this gig doesn't work out... If your employee is doing OK, there's no reason to think the world is ending...

2.  Employees focus on how they are doing first, without much thought to overall results - Ramirez is doing his part. He's batting .429 (9-for-21) with four home runs and 11 RBI in Boston's seven playoff games. He hit the third of the Red Sox's three consecutive homers in the sixth inning of Tuesday's 7-3 loss to the Indians.  If employees consider themselves the best at what they do, most of them sleep fine.

3.  Work/Life Balance means you can't be all hari-cari if you are doing your best - Like your most balanced employees, Manny has perspective on the results.  I'm not saying you should live like Manny - far from it.  But if you have a good family life, good health, etc., can you really be "do or die" every day?

Of course, there are a couple of key ways that Manny's situation is different from what we ordinarily talk about regarding employee engagement on company results:

1.  The series Manny is referring to isn't "do or die" - the Red Sox have great overall results - The ALCS that Manny is being flippant about is more like a RFP your company has out - it's an event in time that will help overall results, but won't likely be "make or break".   When you talk about your employees caring about overall results, you aren't talking about one RFP or project.  You're talking about the overall success of the company, profit/loss etc.

2.  Manny knows he's firmly tied to the bottom line with the Red Sox; your employees don't - All Manny has to do to know he is part of the financial success of the Red Sox is look in the stands and see the "24" jerseys (his number).   How does Fred in Finance know that his work on the 2008 forecast impacts the bottom line?

Fred in Finance (and all like him) is the key for those of us wishing to make employees care about company results.  How can you link what he does to the overall results of the company and make him care, beyond the normal "will I have a job" and "is there room to be promoted" considerations?

For my money, we can publish financials, talk about trends, etc. in the hopes of engaging employees, but at the end of the day, only one thing matters - the ability of our managers and supervisors to identify and communicate the linkage between individual efforts and results.  Most managers can't do it.  Give it a try and role play the situation - it's ugly...

And that's why it's so hard to do.  And maybe why the Manny's of the world drive us crazy...

As a digital plumber that has worked in companies from 25 to 25,000, I know what you are saying. It is amazing how no one understands this: paycheck = company performance.

Every interaction with a customer is a chance to help your company beat out the competition.

I tend to see this disconnect from the "Gen Y" crowd the most. Sorry to pick on them, but it's almost always the "younger" workers that don't connect paychecks with customer satisfaction.

I guess I'm done with my ageism rant now.

Now if we could just get profit sharing, we may all understand it a little bit better...

What many people are missing when discussing this latest "Manny-ism" is that he is simply displaying a characteristic that is desirable of an offensive baseball player. These guys fail, on average, 7 out of 10 times. If they took these failures too seriously, they'd all be miserable wrecks. This sort of ambivalence to the outcome actually helps in this profession.

Scott - Agree with your thoughts, but I see it a lot in boomers and X as well. Maybe not in the same percentages, but it's there. We're all human, so if we think we are getting it done, it's hard to keep from being near-sighted...

Chris - nice point, got to have a short memory in this game. Seems like it worked out pretty well for Manny and the Sox....

Kris:
I really like your writing. The insight you bring and the connections you make to things makes me feel like the Scarecrow in The Wizard of Oz "I could think deep thoughts, if I only had a brain." Maybe one day I will make it to the Wizard, in the meantime I will read your blog and learn and enjoy.