Visionary Stuff - Inflatable Pigs In Front of Your Building....

I'm a little late to the game on this one, but I couldn't resist a belated post.  The old innovation in labor organizing?  Inflatable rats in front of buildings in NYC.  The new innovation from labor?  Inflatable Pigs!!  From FinancialWeek:

"During the past several months, labor organizers in New York City have been introducing the 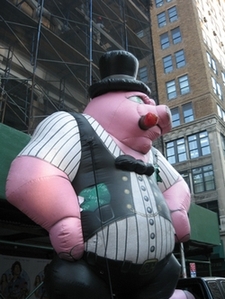 “greedy pig” balloon to employers at their work sites. The 12-foot-tall balloon portrays a sneering creature decked out in a top hat and suit, chomping on a cigar.

While the giant rat, with its sharp fangs and beady eyes, has been effective in getting people’s attention, it was time for something new, said Richard Weiss, a spokesman for Construction and General Building Laborers Local 79, a New York union that helped design the pig a couple of years ago.

Alrighty then... Marketing 101... When the best rational argument/benefit summary you can provide no longer resonates with the target audience, it's time for.... Shock and Awe!!!

Morty!  Attendance was down at the meeting last night.  Cue the Pig!!  And get some scab picket line participants from the temp agency while you're on the phone.

What's next?  The inflatable leech attached to the building?