Home Subscribe
NFL Performance Management - "You Play to Win the Game"...
Resumes w/Pictures - Where are all the beautiful people?....

In what has become an annual proclamation, the business wires are rolling out the "shock and awe" figures related to Fantasy Football and its impact on workplace productivity.  From a widely cited report: 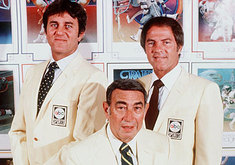 The 17-week NFL regular season, stretching from September through December, according to the study, results in a fourth-quarter $18.7 billion productivity loss.

In a positive note, it looks like most of the bureaucrats have given up trying to control the madness.  A glimmer of hope after years of puritan reflection and conference calls on how to control this American institution:

"There is a major decline in morale among younger workers when an employer is viewed as being too heavy handed in trying to micromanage employees’ activities, “If you want a non-productive Generation Y employee, put him on a short leash.”

Try to limit computer use at work, and younger employees will “whip out a BlackBerry or iPhone.”

“Companies could actually use fantasy football leagues as a way to bring employees together,” “Employers spend a lot of money to get their employees to bond, and here’s a way.”

So, what are your choices as a HR Lead for your company?  Three choices, with sub flavors, seem to be available:

1.  Police it, either directly or by shutting down access to search terms and sites known to host leagues (see ESPN for a big volume player);

2.  Embrace it, and run a contest (don't think you want to embrace betting on this type of thing, unless you are a HR pro in Vegas?), maybe with some prize money going to the non-profit of the winner's choice; or

3.  Ignore it and let nature run its course (which is what most people will do).

Many of you won't have a choice since you work for large employers who won't touch this with a ten foot pole.  As for me, with my Midwestern roots, my league team is aptly named "Mike Martz Will Destroy You All", a shout out to the glory days with Kurt Warner and the Rams.  Not a warm and fuzzy HR-friendly name, but it will do....

Posted at 04:16 AM in Communications, Employee Relations, Workplace | Permalink | Comments (5)

Analyzing "productivity loss" by extrapolating some huge number of lost hours attributed to some minor workplace dalliance is a real red herring. It can be used to criticize almost anything. Think about how many nonproductive activities can be aggregated to take up an hour a week (12 minutes a day). Rip out the coffee maker its costing us $1.1 billion in lost productivity.

This type of analysis appeals to employers who aren't comfortable addressing the individual abuses and feel they need to adopt a company policy to correct the obvious performance deficiencies of one person. Spending 2 hours a day on E-bay is not the same as an hour a week on Fantasy Football. So don't adopt a policy that prohibits personal internet use unless you are willing to police it and discipline both major and minor infractions.

P.S. I have a killer line-up in my Fantasy League.

You will note that this completly agrees with Counsellor Moore.

Part of the problem with the fantasy football and surfing the net at work issues comes from the fact that companies treat them as a policy problem and not a supervision problem. If the supervisor is doing what supervisors should do, then the supervisor will know if there's a productivity problem or a morale problem or not and deal with them accordingly. Making this kind of thing a policy problem kicks it upstairs and leads to dumb pronouncements that often make the front page of the local paper.

Fantasy Football is also a great form of inter-company collaboration.

Let the season begin. Use technology to drive collaboration and innovation; too many try to drive people away from technology and kill the future of some relationships.

Hopefully you know from my post that I am in total agreement with you. We've got a couple of company leagues going, so we embrace it. Good to be at a smaller company in that regard....

Interesting comments - Misses a big point Internet access is "purchased" by the business to conduct its business. A certain amount of personal usage is a given but the overall purpose of Internet access is to support/enhance the operations of the company - not the personal needs of its employees. Perhaps instead of establishing a policy or micro managing an individuals Internet usage the business docks everyone pay for personal Internet usage - I wonder how quick people would begin to tattle on others using the Internet for Fantasy football. Its ok when someone else is paying for it.