Home Subscribe
Should You Fire a Laggard to Give Your Stars More Than A 5% Increase?
Office Politics - You Are Where You Sit at the Table...

You're a HR pro, so you realize that a lot of the brands you love have cool workplace cultures behind them.  All together now!!   Let's name the brands we love with reported cool cultures!! 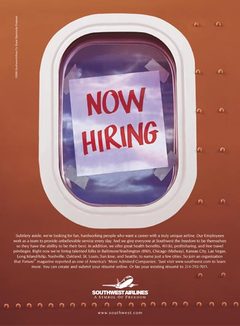 --Starbucks
--Google
--Apple
--Starbucks (I like coffee, and it's my blog, so I'm listing it twice)
--Whole Foods (except for the whole CEO spy blogging thing - check out the John Hollon blog for more)
--The Cable Company (Joking! Just seeing if you were still there!)
--Southwest Airlines...

Oops.  Apparently one of the giants in the workplace culture biz is stumbling.  Wire reports indicate that Southwest is doing what many never thought they would have to - offering voluntary buyout packages to trim their workforce.  Notes from the NY Times:

"Southwest Airlines is offering buyouts to about one-fourth of its employees in an effort to cut costs as the discount carrier heads into a period of expected slower growth.

Southwest, based in Dallas, said Tuesday it is offering $25,000 in cash as well as health and dental benefits to 8,700 flight attendants, baggage handlers and other employees. The offer was not extended to pilots and mechanics.

The workers have until Aug. 10 to accept the offers, which began showing up in their mailboxes on Monday, said Brandy King, a Southwest spokeswoman. She said the company did not have a target number of job or cost reductions it hoped to achieve.

That stinks.  I've long been a SW flier, and my loyalty and love for the brand has continued even though the savings you get by flying SW really ceased 2-3 years ago when the other carriers woke up and slashed their fares to generate more volume.  The main reason for my loyalty?  The flight attendants and gate workers have always been about 90% happier and more enthusiastic than their peers at other airlines.

Normally, I would question voluntary packages over layoffs.  Don't your best end up taking the cash and leaving with voluntary packages?  I hope that kinder, gentler approach allows Southwest employees to maintain their enthusiasm, content with the knowledge the company opted to go with the most friendly approach.

May we all continue to hear flight attendants from SW get on the loudspeaker with limericks....